Formula One is considered the ultimate stage for open wheel racing around the world. What most people don’t realize, is that Formula One is also the source of many automotive technology innovations.

In the 70’s and 80’s, Formula One was a hotbed of technological development. Many of the features that are standard on most cars today were proven effective in Formula One racing. Traction control system, fuel injection and carbon brakes are common technologies that all came from the rigorous world of Formula One.

Of course, it was not a smooth road for any of these innovations. When these technologies were adopted in F1, they were new and presented numerous performance issues. Many teams struggled to make the technology work and often introduced new designs and specifications at every race. 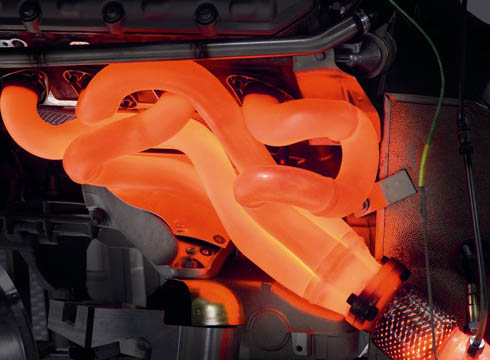 The exhaust manifold on the typical 2.4L Formula 1 V8 is subjected to tremendous stress. Consider the following:

What does that all boil down to? Put simply, if a company can figure out how to design an efficient Formula 1 exhaust system that is resistant to extreme temperatures while being lightweight, they’ve done something amazing. That knowledge can be used to improve the exhaust manifold in your car.

KERS stands for, Kinetic Energy Recovery System. It uses flywheel technology, a very old concept, to capture and store energy normally lost during breaking. In Formula One, this energy can be used for a power boost to gain extra speed or get up to speed faster. The use of KERS is limited by the F1 rules to only a handful of seconds each lap.

In commercial application, the KERS system is used to conserve fuel and, consequently, preserve the environment. Companies like Volvo and Porche are utilizing KERS in newer cars to provide the acceleration power necessary after stopping at a red light or stop sign.

It was not clear in 2007, the year KERS was introduced, that it would still be used in F1 in the following season, let alone be adopted in road cars. Several teams, including Red Bull, did not use KERS on their cars. Every team using KERS experienced reliability issues that adversely impacted their race results. McLaren and a few other teams invested heavily the technology and by the end of the season were seeing real and tangible advantages. In 2008 all the teams were at least attempting to use KERS every race weekend and it is taken for granted in Formula One racing today.

The Cost of Performance

Such advances in technology do not come cheap. This is one reason why Formula One has been such fertile ground for automotive innovation. Until recently, F1 teams were able to operate on budgets that were limited only by their ability to raise funds. Today team budgets are capped. This limit on spending has reduced race performance issues by making the cars much more reliable. It is also making it much harder for F1 to produce additional cutting edge technological innovations for road cars in the foreseeable future.

About the Author: Miles Walker is a freelance writer and blogger who usually looks at car insurance quotes over at CarinsuranceComparison.Org. His most recent review looked at the best Connecticut car insurance.