Will I Gain More Horsepower With An Exhaust System?

Don’t Focus On Horsepower Only

Because horsepower is a function of RPM, it’s very easy to show big horsepower gains on paper. Diesel trucks are a great example – because they generate gobs of torque anyways, adding an extra 35 lb-ft of torque at 3,300 RPM results in a gain of 23hp. This number may seem impressive, but an extra 35 lb-ft of torque at 3,300 RPM isn’t that useful to your typical diesel truck owner. It’s a good increase to be sure, but it’s not usable power.

The other reason that you shouldn’t put a lot of stock in manufacturer estimates is that dyno results are fairly easy to manipulate. When a vehicle is tested on a dyno, there can be significant variations from test to test without any change to the engine. If a manufacturer takes their worst run from their “before” tests and their best from “after” tests, they can show a really big gain that’s mostly due to normal variations between runs. 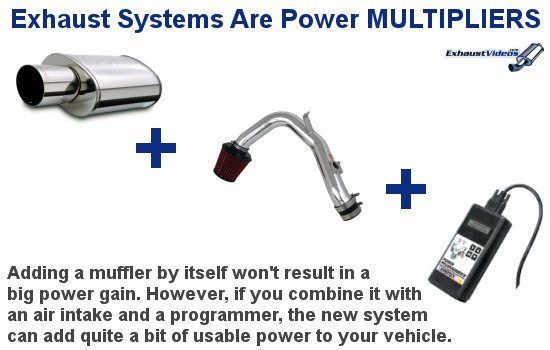 HOWEVER, exhaust systems have a multiplying effect if you combine them with other add-ons. The exhaust system by itself won’t add a lot of power, but combined with an air intake and a performance chip or power programmer you could see a significant increase in performance. You’ll also see a slight increase in fuel economy (assuming you keep your foot out of it, of course).

Remember That The Intangibles Have A Value

Considering how inexpensive an after-market muffler is, it’s a nice way to customize your vehicle on a budget. The icing on the cake is slightly more power and improved fuel economy.