BorgWarner might be more known in some circles for their gearboxes than their turbo applications, but the company’s excellence in engineering has also seen them produce some interesting power adders. The company has long manufactured OEM turbochargers for companies such as Porsche, Audi and BMW, and they have also been an important part of past racing championship teams, giving the brand a distinguished history in both the street and track driving realms. 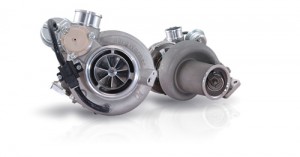 A pair of EFR turbochargers.

The latest state of the art turbocharger offerings from BorgWarner are the EFR line, which were introduced this past fall. Built by BorgWarner TurboSystems at their facility in Asheville, NC, the EFR (Engineered For Racing) series of turbos have taken a thoroughly modern approach to turbine design in an effort to “reinvent” the turbocharger, according to company personnel.

EFR turbos have been conceived as part of an effort to manufacture turbochargers that not only offer huge boost and airflow but which are also durable and capable of being regularly driven without compromising streetability. In order to accomplish this seemingly difficult marriage of quick spooling and big boost, BorgWarner TurboSystems extensively evaluated every single aspect of turbocharger design.

A Fresh Take on Turbo Performance

What the company’s engineers discovered was that many of the components found in a modern turbocharger could be optimized or combined in order to simplify response and power generation. In addition to this streamlining, BorgWarner also made serious aerodynamic improvements to the turbine blades themselves, scrapping currently accepted standards and developing its own designs which were better matched to the realities of high output engines. As a result, EFR turbos feature dual ceramic ball bearings, a flexible compressor cover, high flow wastegates and a low inertia turbine wheel with forged milled compressor wheels. The BorgWarner EFR line of turbos comes in a range of different sizes that can handle up to 1,000 horsepower, using compressor wheels sized between 62mm at the low end and 91mm at the top.

The decision to abandon previous products and platforms and start with a clean sheet turbo design is certainly a unique perspective to have been adopted by a turbo manufacturer. It is this pathway that has allowed BorgWarner TurboSystems to create a line of entirely fresh turbochargers that take the concept of aftermarket performance to an entirely new level.