If the idea of rolling around in an armored vehicle gives you a sense of comfort, chances are good you’re either a very important person or someone working in a very dangerous part of the world. Either way, this recommended read is for you. 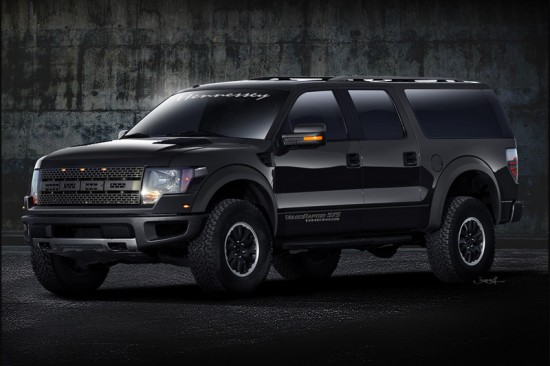 In 2012, Hennessey Performance will be offering an armored SUV built from the F150 Raptor platform.

It seems that Hennessy Performance – the company famous for offering performance kits that can make 1000+ hp Corvettes (among many others) – is getting into the armored vehicle business. Their first entrant is going to be a Ford F150 Raptor converted to a SUV, with armor, a 575 hp supercharged 6.2L V8, and enhanced suspension tuning.

The extra horsepower and enhanced suspension tuning are necessary because armored vehicles are significantly heavier than the original vehicle they’re based on. Adding 2k to 5k pounds of armor plating to surround the passengers and engine, thicker window glass, and any other accessories (some armored vehicles have smoke screen systems, electrified door handles, etc.) can overwhelm the base vehicle’s engine and suspension, making it slow and unresponsive.

Obviously, the last thing you want when running from the bad guys is a vehicle that’s slow and unresponsive.

While it’s not exactly clear to me why Hennessey is converting an F-150 Raptor into an armored SUV (it seems like it would be easier to just convert an Expedition) it could be that Hennessey sees something we don’t. Maybe the VelociRaptor will be some sort of off-road armored vehicle…

Hennessey Performance announces new performance upgrades for armored vehicles such as the Chevrolet Suburban and Cadillac Escalade. Called Armored Performance Vehicles (APV), the company also plans to release a supercharged SUV based on the off-road-ready Ford Raptor truck in both armored and non-armored variants.