Why Does My Catalytic Converter Need Replaced?

The catalytic converter is the single-most important piece of emissions equipment on a modern vehicle (except, perhaps, for the engine computer that controls combustion). Catalytic converters turn toxic CO (carbon monoxide) and NOx (nitrous oxides) into relatively harmless carbon dioxide and water.

The amazing thing about catalytic converters is that they have no moving parts – they use ceramic honeycombs coated in precious metals to “cook” the exhaust gases and get rid of almost all the pollutants. 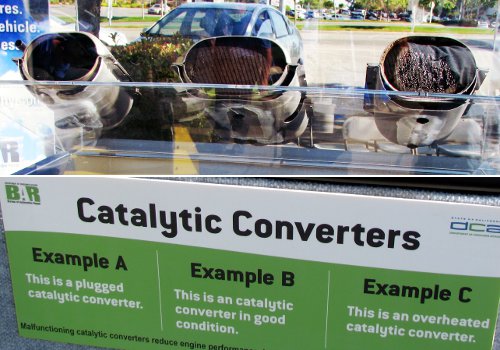 Even though they have no moving parts, catalytic converters often require replacement.

The question is, with no moving parts, why is it that a catalytic converter would ever need to be replaced?

1. Rust. Rust is the enemy of every exhaust system component – especially in humid climates near the Ocean. Catalytic converters usually rust from the outside in, and even with frequent under-carriage washes a catalytic converter will eventually rust enough to become damaged.

Rust is inevitable, and if your vehicle is more than 8 years old and/or you live in a rust-prone climate, you might need to replace your catalytic converter.

As you can imagine, burning off extra fuel in the catalytic converter can cause extreme temperatures inside the converter. Eventually, these high temps can destroy the specially-coated honeycomb inside.

Engines can run rich for dozens of different reasons – broken O2 sensors are a common cause, but they’re not the only possibility. Usually, an engine running rich will give you a “check engine” warning.

Where to Buy A Replacement Catalytic Converter

You can save hundreds of dollars buying a replacement catalytic converter online, and then your local muffler shop will install it for a nominal fee (typically 1-2 hours of labor to remove old cat and install new one).

NOTE: Before buying a new catalytic converter, make sure you know why the old one failed. There’s no point in buying a new one if it’s just going to fail because there’s a problem with the engine.