A vehicle exhaust system must:

Here’s a quick overview of each of these tasks and why they’re important.

Vehicle exhaust contains toxic carbon monoxide gas, so it must be routed away from the passenger compartment

First, let’s talk about why an exhaust system is a necessary safety feature. If there weren’t pipes to carry the exhaust gases away from the passenger compartment, the gases (which include toxic carbon monoxide) could poison the occupants of the car. For this reason, an exhaust leak should be considered a necessary repair. 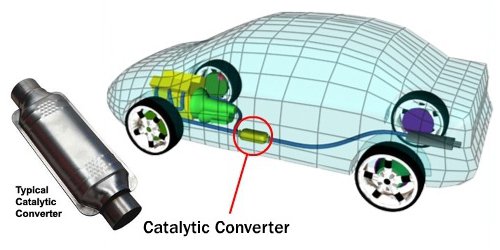 Next, let’s talk about how exhaust systems “scrub” exhaust gas. In this context, the word “scrub” refers to cleaning/removing pollution from the exhaust gas so that it does as little environmental damage as possible. Since the 1970’s, vehicles have been legally required to use something called a catalytic converter to reduce the amount of toxic gas coming out of a vehicle’s exhaust system.

Catalytic converters use expensive and rare metals as catalysts for a simple process that forces exhaust gases to essentially burn themselves off. To learn more about how catalytic converters help clean-up vehicle emissions, check out this video from The Science Channel.

Finally, let’s talk about why and how an exhaust system muffles the sound of an engine… 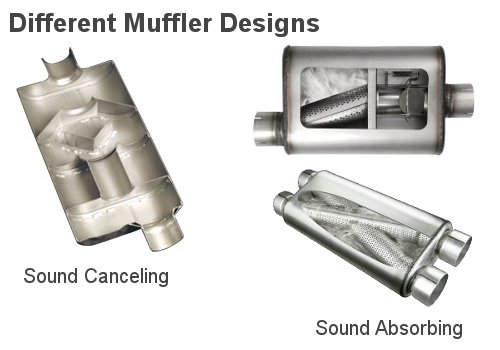 Why exhaust systems have mufflers: An engine that’s allowed to run without any sort of muffler is incredibly loud, especially at wide open throttle. Mufflers reduce this sound to make driving a little more pleasant, as well as to reduce the amount of noise that cars make on public roads. Most cities and states have ordinances regulating the amount of noise a vehicle can legally make, and that means that mufflers are required almost anywhere in the USA or Canada.

Here’s an example of an un-muffled engine, also known as a “straight-pipe” exhaust system:

Note: Contrary to popular belief, mufflers do not automatically reduce vehicle performance. A correctly designed cat-back exhaust system can have a muffler without sacrificing any power.

How an exhaust system muffles engine sound: Almost all exhaust systems have a 12-24″ long steel “box” that reduces the power of sound waves to help quiet the exhaust – and this box is commonly known as a muffler. Different types of mufflers use different techniques to reduce sound, but most mufflers use one or both of the following methods:

Sound absorbing mufflers are the most common type, and almost every muffler uses some combination of these two methods.