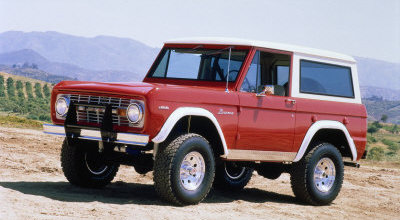 The Ford Bronco name was popular from 1966 to 1996, initially resembling a Jeep-like CJ through 1977 before Ford drastically upsized the model and placed it on the same platform underpinning its big pickup trucks. From 1978 on, the Bronco battled with the Chevy Blazer and Dodge Ramcharger for big SUV sales, providing on- and off-road versatility and generous amounts of cabin and cargo room.

The 1978 and 1979 models represent the Bronco’s second generation, vehicles delayed by several years following the first gas crisis of the early 1970s. Ford had planned to build the Bronco years earlier, but had to postpone its plans to concentrate on bringing out a series of more efficient, but forgettable car models including the Pinto, Granada and LTD II.

Come 1980, the third and final generation Bronco made its debut, and was based on the new F-150 which was also introduced that year. For 17 model years the third generation Bronco soldiered on, receiving multiple refreshes, but not benefitting from the wholesale changes made in 1987 and 1992 for its pickup trucks.

The standard engine offered for the third generation Ford Bronco was a 4.9-liter inline-six rated at 145 horsepower and 265 pound-feet of torque. Paired with a five-speed manual or 4-speed automatic transmission, this two-door 4×4 balanced fuel economy with utility.

By 1993 only the 5.0-liter V-8 engine remained as Ford began to wind down the model in favor of the smaller, but popular Explorer. Yes, there were also a limited number of four-door Ford Broncos built, with Michigan’s Centurion Vehicles, producing these collectors items.

Ford Bronco enthusiasts overlook the SUV’s weak on-road performance, prizing it for what it can do off-road especially when modified to tackle mud pits, navigate river beds, negotiate rocks or plow  through snow.

Some brands offering exhaust parts and systems for the Bronco: