Do you have an opinion about Flowmaster exhaust systems? Leave your rating above.

Ray Flugger, who founded Flowmaster in 1983, was known for creating restriction-free “suitcase mufflers” for California sprint car racers back when the company got started. Nearly 30 years later, Flowmaster has become one of the best-selling exhaust brands in North America.

Flowmaster offers a full line of mufflers for every taste and budget, as well as a large selection of cat-back systems, custom mufflers strictly for racing applications, headers, and even ATV mufflers. Flowmaster’s principle technology is called “Delta Flow,” and it’s billed as a very precise chamber design that cancels sound waves using deflectors placed in a specific arrangement. The goal of any sound canceling muffler is to clip or eliminate sounds outside a specific frequency range. 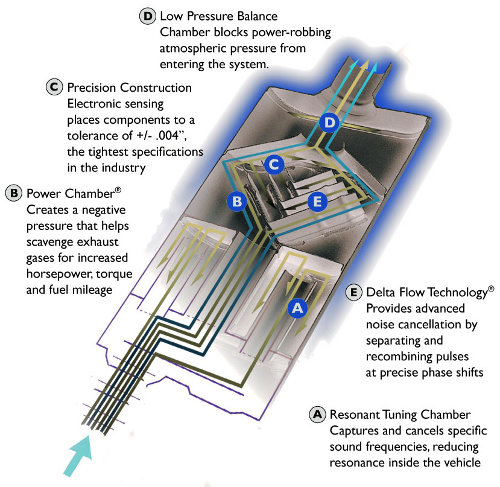 Flowmaster also refers to their mufflers as “power chambers” because – supposedly – they create additional power. The specifics aren’t mentioned, but the explanation goes like this:

Flowmaster also claims that their muffler design converts sound energy into areas of low pressure, further enhancing the flow of a Flowmaster muffler and allowing them to call their system a “power chamber.”

Flowmaster’s patented “chambered” design is what sets it apart from any other muffler. The theory behind the design is based on basic principles of physics. By splitting the exhaust stream (exhaust pulses & sound energy) and then recombining them in another chamber, the collision of energy cancels the sound waves which creates a low pressure area in its place. This resulting low pressure area then helps scavenge/accelerate the following pulses into the muffler and out the tailpipe resulting in a more efficient and cleaner burn, which means more power.

While it’s hard to know how much of this is science and how much is hyperbole, it’s obvious that Flowmaster knows something about mufflers…after all, they’re one of the best-selling companies and a popular choice for vehicles of all makes and models.

Here are some tips about Flowmaster’s products:

With their well-known reputation and numerous installations to their credit, Flowmaster mufflers should be considered if they are available.

Find a Flowmaster Exhaust System For Your Vehicle