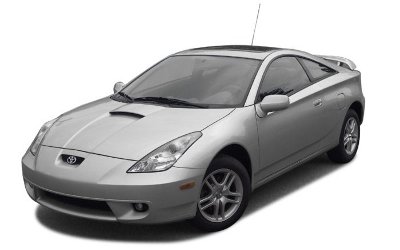 You have to go back to the early 1970s to find the first Toyota Celica sold in the United States. Indeed, the Celica is one of the earliest modern Toyota models, introduced to the Japanese market in 1970 and to America the following year. Through 2005, the sport coupe Celica represented Toyota’s fun side, discontinued because of declining segment demand.

For Toyota Celica enthusiasts all isn’t lost — the Scion tC is considered the “spiritual successor” to the vaunted Celica, although you may have to squint your eyes to believe that!

By the time the 1994 Toyota Celica hit the market, the coupe was now in its sixth generation. That model was a bit larger and less agile than the fifth generation Celica, inheriting its engines from the Corolla and Camry. Powered by its front wheels, this Celica offered three body styles: coupe, hatchback and convertible.

The Celica’s last hurrah began with the 2000 model year when the seventh generation Celica hit the market. Only one body style remained, a hatchback coupe, powered by a pair of 1.8-liter engines. The standard four is paired with a 5-speed manual transmission and is rated at 140 horsepower at 6,400 rpm and 125 foot-pounds of torque at 4,200 rpm. An all-aluminum four is found in the GT-S, rated at 180 horsepower at 7,600 rpm and 133- lb.-ft. of torque at 6,800 rpm. Both engines were optionally paired with four-speed automatics.

Competition for the Toyota Celica has included the Volkswagen Golf GTI, Mitsubishi Eclipse and Honda Civic Coupe or Acura RSX. Naturally, the best model to offer up against the competition is the Celica GT-S, offering 0 to 60 times as low as 6.5 seconds and that is without a supercharger, performance exhaust system or cold air intake in place. No matter, the Celica has the looks of a racer and with aftermarket struts and sway bar, tie bars and coilovers in place, this front-wheel-drive sport coupe offers up minimum torque steer and plenty of style for sport coupe enthusiasts.

A brand offering exhaust parts and systems for the Celica: