There will always be a market for ultra-high end automotive performance parts, and on the exhaust side of that equation is Akrapovic, a European company which has been manufacturing top shelf components since 1990. Founder Igor Akrapovic parlayed his success as a motorcycle racer into a performance exhaust empire that builds both parts and complete systems for bikes and cars. 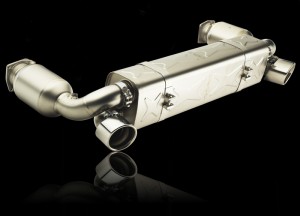 There are a number of things that set Akrapovic apart from other performance exhaust companies. The brand has a huge presence in the motorcycle racing world, which has embraced their exhaust systems as par for the course, and the organization has also dabbled in Formula 1. Perhaps most impressively, in 2009 Akrapovic opened up its own foundry in order to take advantage of the business synergies between metalworking and exhaust production. Foundry ownership also enabled Akrapovic to take complete control over the quality of the titanium metals used in its automotive exhaust systems.

Some of the most impressive exhaust options available from Akrapovic are meant to be installed on the Porsche 911. Akrapovic provides complete exhaust systems for 2000 – 2010 Porsche 911 models, including race-bred editions such as the 911 GT2 and GT3 and the street terror that is the 911 Turbo. 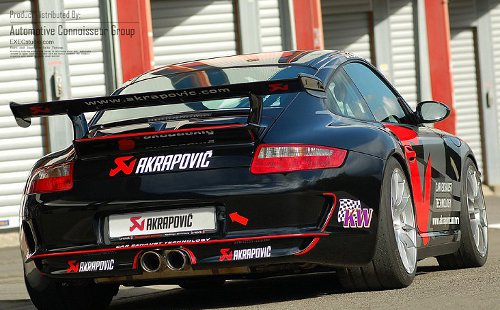 Akrapovic is well-known in the world of Porsche

Akrapovic’s 911 exhaust systems can be divided into four categories:

1. The Slip-On exhaust systems that it builds for the standard Carrera, the GT3/RS and the Turbo model offer the choice of two different high flow catalytic converters as well as a lightweight titanium construction that significantly reduces the weight at the rear end of the car – up to 33 lbs, depending on the model. The 911 Turbo sees a performance jump of as much as 18.5 horsepower, along with a concomitant torque increase thanks to the reduced backpressure and better turbo breathing.

2. The Akrapovic 911 Slip-On Race systems which can be had on the GT2 as well as the Carrera. This exhaust abandons the street civility of the stock exhaust and instead offers a louder tone, a lighter design and much more flow. The same catalytic converter options remain on the table with the Slip-On Race system, and power gains on the GT2 are listed as 38 horsepower. 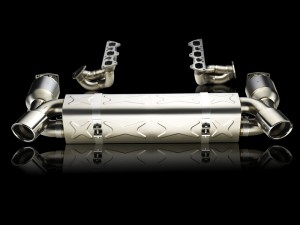 3. The GT2, GT3/RS and the 911 Turbo can take advantage of something called the Evolution exhaust system, which offers more modest performance gains than the Slip-On race but maximize weight savings thanks to the extensive use of titanium in every aspect of the system.

4. There is also an Evolution Race system which combines the lightweight mentality with the high flow design of Akrapovic’s track-specific systems for the ultimate in loud pipe hooliganism and performance.

As far as pricing is concerned, if you have to ask…a full system will run in excess of $2000 (with a lot of systems costing $5k+). Akrapovic is not cheap, but in the context of a $90-$150k sports car, the cost is somewhat understandable. As far as warranty, would you expect anything less than lifetime? Of course not.

Akrapovic only recently setup shop in the United States, but Porsche fans have long awaited the company’s official arrival, following its European exploits in both the racing world and in the street performance scene. The company’s extensive lineup of Porsche-specific exhaust systems should have 911-philes salivating11.