If you’ve ever wondered why someone would remove a perfectly good factory-spec exhaust system and replace it with a loud after-market exhaust system, I’ve got three great reasons for you: 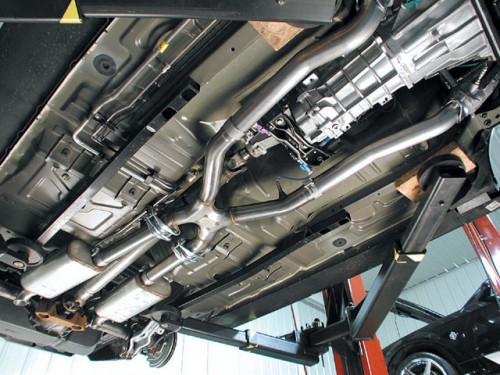 A performance exhaust system will increase engine power, but it will also increase noise levels.

When auto manufacturers spec-out their standard exhaust system, they design something that will appeal to the widest cross-section of consumers. Therefore, almost all new vehicles come with exhaust systems that emphasize quiet operation, as most new vehicle buyers aren’t interested in a loud car.

Unfortunately, quiet exhaust systems are inherently restrictive compared to louder, free-flowing exhausts, so new car buyers end up with a vehicle that’s ever so slightly handicapped in terms of power. By adding a quality after-market exhaust, a vehicle owner can increase engine power a few percent. While that might not sound like much, when you combine an after-market exhaust system with other performance parts like cold air intakes and engine programmers, you can add significant amounts of power to an otherwise stock vehicle. 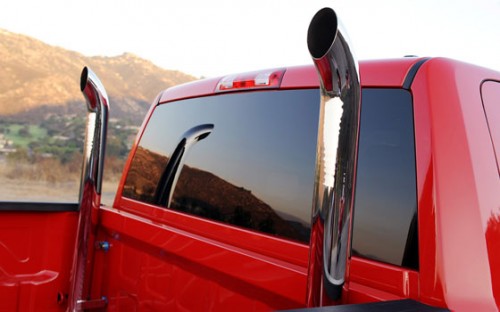 Chrome exhaust stacks are a little extreme, but adding an after-market exhaust system is a simple and inexpensive way to give your vehicle some personality.

Dual exhausts, side exit exhausts, or even chrome exhaust stacks (as seen above) are all styling cues that call out to other enthusiasts and say “Hey! This car is modified!”

Style is also added because after-market exhaust systems give a vehicle a distinctive and aggressive sound. There’s nothing quite like the threatening rumble of a big V8 with a free-flowing exhaust, or the menacing timbre of a high-horsepower V6 screaming down the road.

While these loud sound effects aren’t for everyone, they are an element of a vehicle’s style.

3. Efficiency. Believe it or not, adding a performance after-market exhaust system is likely to improve a vehicle’s fuel economy rating…provided the driver doesn’t drive more aggressively after adding the exhaust, that is.

Because after-market exhaust systems are less restrictive, engines can operate more efficiently. This efficiency gain is relatively small – most people notice only a small 1 or 2 mpg improvement – but again there’s a cumulative effect that many vehicle owners are shooting for. If a truck owner adds a free-flowing after-market exhaust, a tonneau cover, a cold air intake, and programs their engine to be more efficient, they can improve their vehicle’s gas mileage as much as 10%. Considering that many trucks average 15mpg or less, a 10% gain represents a significant savings.

While it’s true that adding an after-market exhaust system isn’t necessary, it’s not exactly wasteful either. For as little as a couple hundred dollars, the average car can sound different with a new muffler, look different with a new exhaust tip, have more power, and get better gas mileage. Not bad, eh?