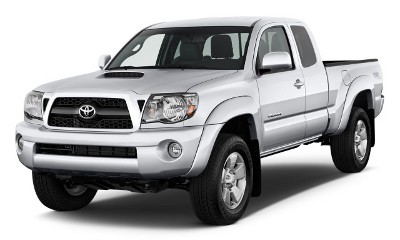 The Toyota Tacoma isn’t the first compact Toyota truck to be sold in the United States, but it is the most well known and popular of them all. Toyota has been making trucks since 1935, but it wasn’t until 1995 that the Tacoma name was ascribed to its seventh generation pickup truck, corresponding to the automaker shifting the truck’s production from Japan to America.

The current or eighth generation Tacoma was introduced in 2005 and is sold in two- and four-wheel-drive, is powered by four- and six-cylinder gas engines and is available in three cab and two truck bed configurations. In all, there are 18 variations of the Tacoma truck, which explains why this model regularly outsells the Nissan Frontier, Ford Ranger, Dodge Dakota and Chevrolet Colorado, its chief competitors.

The Toyota Tacoma is a proven workhorse on- and off-road. Its short wheelbase, tough factory installed components and exceptional low end torque as featured in both engines sets this truck apart from the pack. You can haul all of you favorite “toys” with your Tacoma including jet skis, ATVs, dirt bikes and some smaller boats. By outfitting your Tacoma with a performance aftermarket exhaust system you will increase its performance and enjoy its impressive exhaust note, without sacrificing your truck’s great gas mileage.

The list of brands offering exhaust parts and systems for the Tacoma is extensive: